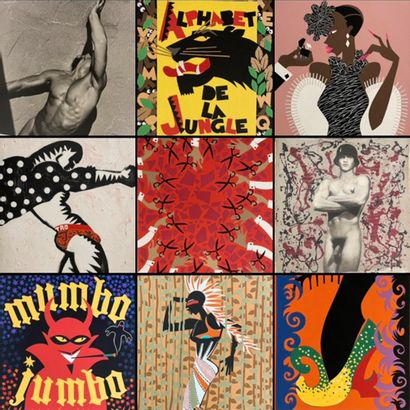 Michael ROBERTS (born in 1947): the Englishman is a journalist, editor, illustrator, photographer and artist, a sort of guru in the world of fashion!

Michael Roberts is also a fashion photographer and illustrator.

In the 1990s, Michael Roberts discovered Canson paper in Paris, which he cut into collages. As fashion director of The New Yorker, his collage illustrations are published to accompany articles or even to make the cover on 22 occasions.

He contributed to the illustration of Vanity Fair; L'Uomo Vogue; the English, Italian, French, American, Brazilian and Japanese Vogue; The Independent on Sunday.

"To make his collages, Michael Roberts uses different kinds of paper, scissors and a scalpel. Through the artist's magic, the cut paper is transformed into vibrant dancing images, with African colors and rhythms. Michael Roberts is the Cocteau of the fashion world. Tina Brown, editor-in-chief of The New Yorker. She even compared him to the artist Erté in one of her letters to him: "You are becoming as important to The New Yorker as Erté was to Harper's Bazaar.

Drawing on the capital's Art Deco heritage and the world of Matisse, Braque and Léger, Michaël Roberts has forged a unique style in France, taking an uncompromising look at the "often excessive, always frivolous" world of fashion.

He works in close collaboration with fashion designers. Some of his creations include: a Tod's moccasin and accessory line, colorful African swimsuits for Skinbikini, "Snowman in Africa" accessories with Gucci for UNICEF, upholstery and wallpaper for Bennison Fabrics.

Roberts has just been appointed Commander of the Order of the British Empire (CBE) in January 2022.

With your consent, we would like to use cookies placed by us on this site. Some of these cookies are strictly necessary for the smooth running of the site. Others are used to:

Your consent to the installation of non-strictly necessary cookies is free and can be withdrawn or given at any time.

By allowing these cookies, you agree to the deposit, reading and use of tracking technologies necessary for their proper functioning.
Read more about our privacy policy.